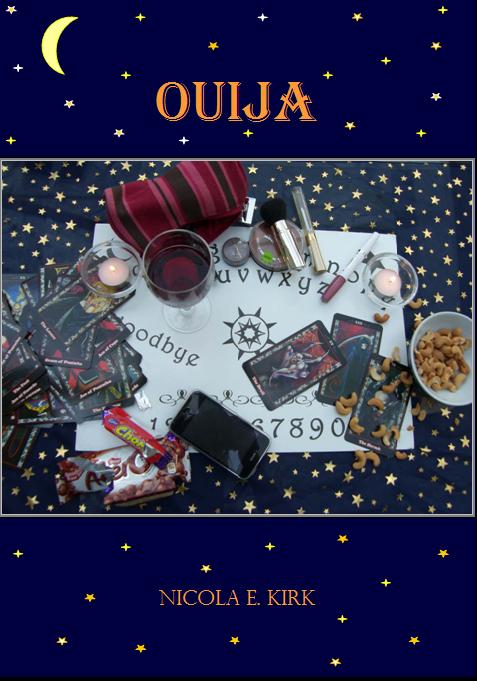 Ouija boards… I’ve seen many mixed reactions from people when it comes to the use of Ouija boards.  Some are openly terrified of them.  Others, such as myself, think they make a very nice table mat when they’re not being used (although I did eventually have to put it away as people often spilled their coffee when they realised what they were using as a coaster).  I am the proud owner of two Ouija boards (is this Ouija broadband?) and I’ve got to say I have not been subject of any interdimensional invasions, possessions or paranormal terrorism.  Perhaps this is just sheer luck or maybe the paranormal world just doesn’t find life at home with the Kirks that appealing.  Perhaps an invasion has been attempted but the Wraiths From Beyond got fed up with treading on my son’s Lego and decided to try somewhere less dangerous instead.

Anyway, this particular novel goes a bit like this…

Lisa, Lex and Rena are best friends – they do everything together, but when an evening’s fun with a Ouija board gets a little out of hand they soon find out just how deep their friendship actually runs.

Ouija is a fictional novel about three women who suspect their Ouija board might just be a direct telephone line to Satan.  Some would say that on its own is terrifying enough, but when a murderous Occultist and her demons set their sights on the women as potential sacrifices for their nefarious rituals, things look pretty dire for the three friends.

CLICK HERE TO BUY THE KINDLE VERSION OF OUIJA

SKARAN – THE SEQUEL TO TIENNADOR NOW AVAILABLE IN PAPERBACK TOO!

Heather King and Alex Charlton return in Skaran, the sequel to Tiennador

Well, I’m loving this.  All my scribblings are becoming available in paperback as well as in Kindle! Having spent ages writing these things, it’s so nice to be able to inflict it all on the world at large.

So here’s my second offering – SKARAN:

“Sometimes being a paranormal investigator isn’t all fun and games, especially when there’s a blood thirsty demon out to get you. When Heather and Alex discover that the Clans of Tiennador are plotting against them they decide it’s time for drastic action… but at what cost?”

If you are feeling so inclined to follow up Tiennador with a copy of Skaran to see what Heather and Alex get up to next, and you want to get your hands on a luverly papery paperback copy, you can do so here:

Or if you’re in the mood to be Kindlised, you can get a Kindle copy here:

Go on, you know you want to…

Heather King and Alex Charlton return in Skaran, the sequel to Tiennador.

Sometimes being a paranormal investigator isn’t all fun and games, especially when there’s a blood thirsty demon out to get you.

When Heather and Alex discover that the Clans of Tiennador are plotting against them they decide it’s time for drastic action… but at what cost?

To place an order email: weirdworld@hotmail.co.uk

TRY BEFORE YOU BUY…

If you’re anything like me, being able to have a quick nose through a book before I buy it is a big bonus.

So… with this in mind, I have added samples of the first chapters of my books to the page below so you can have a look before you buy:

Just click on the link under each book called: “Chapter One Sample…”