I receive regular newsletters from a paranormal website called Phantoms and Monsters – it’s a great way of keeping up with the latest events in the World of the Weird and I’d highly recommend a visit to the website if you are interested in anything from vampires to UFOs.  It covers everything and then some.

Anyway, I came across the following article in today’s newsletter and it really caught my interest so I thought I’d share it with you lot too.  I’d love to hear your thoughts on this one:

“A few weeks ago, I received an interesting inquiry referencing an incident that occurred in the vicinity of Baltimore, Maryland in June 1992. The information was forwarded by a now-retired attorney who continues to live in the area. At the time of the incident, he (who I will refer to as MB) had a private practice with several offices in the Baltimore / Washington DC metro area. He also provided pro bono legal services for the State of Maryland, particularly representing clients with mental disabilities. Since receiving the first email, I had 2 more conversations with MB…which were recorded with his permission. I am going to write his allegory as it was given to me…the resulting statement was approved by MB. Many of the specific and personal details will not be included for MB’s confidentiality and privacy:

* In June 1992, I was assigned a pro bono case / client who was being housed, by court order, in one of the State Hospitals located in the metro Baltimore area.

* I interviewed the client at the State Hospital facility. I informed him that he was facing a weapon possession charge (a vintage Marlin Derringer handgun and ammunition were found in his pants pocket) and other local vagrancy violations.

* The client told me that he went by the name Morris Winthrop. He stated that he was from New Jersey and lived most of his life in New York City. The file showed that there was no record of him residing in the State of Maryland.

* When arrested, Morris wore a high collar white shirt and a brown frock coat and pants. I examined the clothes…later I would discover that these were very similar to Victorian era men’s clothing from the 1870-1880s. He also possessed a silver metal case…similar to a cigarette case. Inside the case was a square piece of black colored material that resembled hard plastic. He was allowed to retain this object while at the facility.

* Morris looked to be in his early 30s, though there was no hair or stubble on his face…just thin eyebrows. He had wispy blond hair and a very pale complexion. The eyes were very deep blue…almost violet in color.

* During the interview, he would look directly at me and smile. He answered few questions other than his name, that he was living in New York City and that he didn’t know how he arrived in Baltimore.

* The physician at the hospital stated that he may be suffering from shock and that there may be some memory loss. I didn’t get that impression while in Morris’ presence. It seemed to me that he knew exactly what was transpiring. To this day, I still do not know why I felt that way.

* At the end of the interview, I told him that he was being held at the facility under court order and that I would seek a hearing date. Morris’ reply to me was ‘thank you for your service. I will contact you…I promise.‘

* The next day I was contacted by the Baltimore County State Attorney’s office and informed that my services were no longer needed in this case. No further information was provided.

* I contacted the physician who was treating Morris. He stated that Morris was no longer at the facility. I asked where he was taken and told that I would need to contact the State Attorney’s office.

* For almost 2 years, no official information was available in regards to Morris.

* In 1994 I was approached by an attendant who had worked at the State Hospital during Morris’ brief stay. I was told that Morris had suddenly disappeared from the ward after his late meal. There was a thorough search conducted without results. Morris’ clothes were retained by the State Attorney’s office. All other items, including the silver metal case, were missing. I have never found out where the weapon was stored…though I assume it is at State Police headquarters.

* At that time, I conducted a private search for Morris Winthrop. I hired a private investigator who found very little information other than that a single 32-year-old man named Morris Winthrop had resided in New York City in 1877…until he went missing without a trace. All his property (in Manhattan) had been left behind. The police found no evidence of foul play.

* After 19 years, I never found another reference to Morris Winthrop. This has become a bit of an obsession for me. I have hired other private investigators over the years but nothing has been found. If Morris was a ‘time traveler’, I wonder if he’ll contact me as promised? MB

NOTE: Like I stated before, this is the final statement approved by MB. Could this be a case of ‘time travel?’ I would have preferred more information but MB is quite wary of how others would interpret his quest into Morris’ identity and deposition. He asked me not to conduct a private inquiry. It seems his long-term investigation has ruffled the feathers of a few local and state officials over the years.”

With thanks to Phantoms And Monsters. 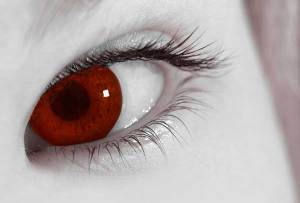 Bad guys in horror movies usually can’t hide their identities for long because the directors like to give them neon red eyeballs.  Vampires, werewolves, demonic doggies, they all get the same treatment.  But is this stereotyping?  Is there any basis for assuming all things evil should have eyes redder than a baboon’s bottom?

Whilst looking for other occurrences of evil red-eyed beings, I unearthed a story about a particularly evil statue known as Black Agnes, or Black Aggie.  An allegedly murderous statue by this name used to live in Loudon Park Cemetery, Baltimore, Maryland, USA.  Rumours that the statue harboured murderous intentions were cooked up by kids and used as part of initiation ceremonies to scare the life out of their friends.  The story went that Black Aggie’s eyes would burn bright red at night and would blind anyone who looked into them.  Other versions of the story say that part of the initiation ceremony was to sit on the statue’s lap all night, but the last person who was brave enough to take up the dare was found dead the next morning, still sitting on the statue’s lap but with marks on her body apparently from the statue’s deadly embrace.  The statue was moved twice to put an end to the rituals and ended up in the Smithsonian Institute where it was finally made teenager proof.

Another creature of the night that regularly has red eyes is the Black Shuck, a demonic dog that roams around the Norfolk and Suffolk coastlines.  Some say it is as big as a Great Dane, others that it’s as big as a horse.  The Shuck may have been the inspiration for Arthur Conan Doyle’s, The Hound of the Baskervilles.  There are confusing reports about the Shuck and its motives for making an appearance.  Some say that if you see the beast then someone close to you will die.  Other say the Shuck sometimes accompanies women travelling on their own and acts as a protector.  Personally, unless it comes with a sturdy muzzle, I’d rather take my chances alone…  Some graveyards are reputedly prowled by a Shuck but the beast also enjoys lurking down side roads, snuffling around at crossroads (popular places to bury suicides), and, of course, slinking around dark and foreboding forests.

One of my all time favourite places also comes with a resident red-eyed ghost.  Highgate Cemetery, London, is famous for its vampire stories from the early 1970s but it is not the vampire that I’m interested in here.  There is a recent report (alas, I don’t have the exact date for the report) of a pedestrian who was walking down the lane that runs through the cemetery.  I can only assume they mean Swains Lane which runs between the east and the west cemeteries.  The pedestrian reported seeing a tall apparition with glowing red eyes and wearing a long black cloak.  The apparition whispered ‘good evening, sir,’ as it glided past and disappeared through a stone wall.  Perhaps it was the vampire that allegedly haunted the cemetery in the 1970s, but I understand Sean Manchester pounded the life out of that particular entity with a hammer and stake many years ago.

Going back to the theme of beasties with red eyes, I recently came across a story posted on Phantoms and Monsters about a couple who were on their way home to Illinois.  Just south of a place called Fuller Cemetery (unfortunate name), the husband thought he saw a large bird of some description by the side of the road.  He didn’t think much of it but his wife began to scream.  He pulled over into the entrance to the cemetery to calm her down, telling her it had only been a big bird she’d seen, but apparently that wasn’t what the wife had seen at all.  She had seen a large animal running along by the side of their car – it was so big its head had come to the top of the window!  She was sure the creature she had seen was a huge bear with red eyes but the area is not known for being a home to bears and certainly not ones with red eyes.

It would seem that although most people would rather not have an encounter with some red-eyed creature of the night, not all  are deserving of an evil reputation, for example the Shuck who likes to protect lone, female travellers. Although it might be advisable not to go and annoy graveyard statues, just in case.