I’ve written before about some of the weird dreams I have. My Dearly Bemused tells me he very rarely remembers dreams and, based on the dream I had the other night, sometimes I envy him. The one I had… well, it left me shuddering with revulsion and rather pleased that my daughter came in to see me at 3am because she’d managed, somehow, to smack her head on the wall in her sleep. An impressive feat and one that I didn’t mind getting out of a nice warm bed to deal with because… the dream was about spiders. Not your common or garden diddly little guy that you can turn a blind eye to when you spot it hiding in the corner of your sitting room, but mind-blowing huge ones that appear to be more intelligent than the average person. The kind of spider that you suspect has been observing you for quite some time, and now knows your daily schedule, what your middle name is and where you hide your chocolate stash.

If I dream of a house, it’s generally always my parent’s house. I haven’t lived in that house for about twenty years. That’s quite some time but I retain a very close tie to that house. It’s the only house I remember growing up in because we moved into it when I was three and I stayed there until I met my Other Half. It’s the house my grandmother also lived and died in, so I suppose it’s no surprise that it’s the house my brain likes to visit when it sleeps. But for some reason, when I dream of that house, it’s never quite as I know it. There’s always something a bit different about it. In this particular dream, I was looking for a way in because at my parents’ house you never go in the front door. No, no, we use the tradesman entrance. I know not why, it’s just something we’ve always done. In my dream, when I realised the front door was not going to be opening anytime soon, I made my way back down the front steps and went past the garage, which was open for some reason. That garage hasn’t been open for many a year, although I know it does open because I remember seeing it when I was a kid and thinking it looked as if B&Q had just exploded in there. Now the garage was open slightly and the light was on. It was getting dark outside so I thought I’d nip in and turn the light off, shut the garage door and then… Oh, hold on a minute, there appeared to be some kind of mini office in there now off to one side that I had never seen before and… well, I can’t leave that light on either because dad will go loopy over the wasted electricity.

Fine, it wasn’t quite this big but… it was close!

And found out very quickly why I never go in there because the place was festooned with horrible cobwebs filled with bits of dead or discarded spider parts. You know the way their bodies disintegrate and fall apart and (shudder) …well, there are no words to describe it really and that’s quite some confession coming from a writer. But I’m not a total wuss, I told myself, and even though my skin was crawling fit to leave my body, I bravely made my way over to that odd little office bit which I know doesn’t actually exist, and reached out for the light switch. And then stopped. Because sitting just above the light switch in a cloud of webs was one of the biggest spiders I’ve ever seen. I paused, quite literally shivering with horror in my sleep. I started to surface out of sleep at this point because Disgust Mode was desperately shaking Sleep Mode by the throat screaming ‘What the hell is going on here?!’ But the horror wasn’t quite over yet. Because above that spider was something quite magnificent, in a deranged, make your skin freeze in a way you wouldn’t believe possible kind of way. Very rarely do I get that feeling but heaven knows I got it then, because through the layers of web I could make out legs as thick as my fingers, attached to a body as big as the palm of my hand. And it didn’t even have the grace to be one of those fuzzy looking spiders either. Nooo, this bastard was shiny, black and I remember thinking that if one of those legs were to break, it would make a sound like a snapping twig.

Daughter dearest, you will never know how happy I was to hear about your plight at 3am that chilly morning so I could nurse the nonexistent bump on your little head back to sleep.

Nothing requires that many legs. 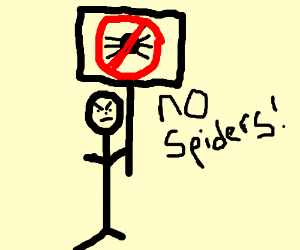 Dreaming of Reality – Or Is It Something Darker?

Dreams are funny things.  They can be so vivid you wake up wondering if it had been a dream at all.  I dreamed once that I’d received a letter in the post and then, when I woke up, spent the best part of the morning looking for the damned thing.

Never did find it.  Odd that.

Early one morning whilst perusing Twitter (babies don’t care what time they get you up, but when they do, you’d better make sure you have something interesting to keep you awake while they have their bottle) I came across one post that said, ‘everything you dream about is something you’ve seen or done in real life’.

I remember many of my dreams, which are generally really nice – dreams of flying or discovering lost tombs (yes, I’ve had one or two of those dreams – Lara Croft has nothing on me).   But sometimes I suffer from oddly disturbing dreams.  Like the one where I went into my little boy’s room to check on him one night.  He was fast asleep in his cot but as I turned to leave I saw an 8-year-old version of him standing next to me in the gloom.  The older version of my son grinned up at me and then abruptly disappeared into thin air.  I’m pretty sure I’ve never seen an 8-year-old version of my son in real life, so why would I dream of him now?  When I woke up from that dream I felt absolutely terrified for some reason and had the worst case of goosepimples and shivers I can ever recall having.  It was one of those moments I thought only existed in bad sitcoms where the sleeper sits bolt upright in bed. My flesh literally crawled.

Who’s Reaching Out To Hold Your Hand At Night?

And only a couple of weeks back, I woke up because I was certain I could feel someone holding my hands, which were laying on top of the covers.  The hands holding mine were freezing cold – I could feel them.   I remember a little voice in my head screeching ‘they’re holding your hands!  They’re holding your hands!‘  Again, I woke up feeling terrified and freezing cold with goosepimples running over my skin like a million icy ants.

What makes us dream these things?  If it’s our brains sorting out the things its experienced during the course of the day, why would I dream about a futuristic version of my son or that someone with horribly cold hands was  holding mine while I slept?

And don’t get me started on the dreams I’ve had about Gene Hackman trying to murder me (I mean, really, why?) or someone shooting me in the back while I walked home from a school I’ve never attended…

Have you ever had strange dreams that have left you feeling spooked or wondering ‘where on earth did that come from?!’