It Is Not Haunted I Tell You!!!

Two years ago, some friends of mine told me about some strange occurrences going on at their home in Essex and they kindly allowed me to do a write up about it.  They moved out of the property once their lease finished and that, it seemed, was the end of that.  Until yesterday, when I received a very sweet email:

You have an article on your site about (name of property removed).

I am the owner of (name of property removed).

Kieron and Melanie were only tenants of this property and did not have permission to allow you to publish this information.  I have never had any problem with ghosts in this property with tenants before or since.  I have lost potential tenancy’s (sic) now because of your article.

If you do not remove the information immediately I shall have no choice but to take legal proceedings against you.”

A somewhat unnecessarily aggressive email perhaps, but I’m not out to upset anyone or cause distress with the things I write about, so I agreed to pull the article.  Whether or not anyone actually decided not to lease the property due to my article is anyone’s guess.  I wouldn’t flatter myself with the notion that anything I write would have any bearing on what people decided to do, but hey ho…

However, whilst the Landlord was not happy about their property being mentioned, which is fair enough, most of the historical information on the property is already out there in the public domain.  The experiences that Kieron and Melanie had whilst in residence at the unnamable property should, I feel, still be available for others to read about.  So, without further ado, following is a pruned version of the original post, minus any place names that might cause Landlords to frown at me:

Kieron and Melanie Savill run a successful paranormal events company in the UK called Paranormal Knights. They are also private investigators and researchers for the Association for the Scientific Study of Anomalous Phenomena (ASSAP). They met as members of the resident paranormal team at Coalhouse Fort in East Tilbury, Essex back in 2007 and shortly afterwards moved in together at their current home. They live there alone. Well, sort of.

“I would often travel past the derelict property,” Kieron said.  “It fascinated me. This once beautiful building left to fall in to such a state was a shame. It had so much character even with the trees and overgrown wildlife that were now trying to consume it.”

The site was eventually bought by a company with the view to demolishing it and selling on the land but then a strange thing happened. The developers fell in love with the buildings and after various visits to the site the company decided that they would restore the buildings and turn them in to residential property.  The property was saved.

The developers lovingly restored the building and, when completed, named the property after the ghost of a Matron that was said to walk around the area at night.

“It seemed like a dream come true when we moved in to the house,” Kieron told me.  “Although very small, it was lovely. The silly thing is we never expected it to be haunted. Even with the name it had been given. It’s not the reason we decided to live there, we just loved the building. However, it wasn’t long before strange things started to happen.

“I guess the first major thing that happened was quite upsetting at the time, especially for my wife Melanie. We have these drinks coasters in the lounge. They are quite heavy, square, solid hardwood ones. When not in use they are always stacked up on a corner of the coffee table.  One night, Melanie came home to find the coasters all lined up standing on their ends around the coffee table like dominos. She was convinced at the time that I had done it, but I hadn’t.  It was upsetting as there were only two explanations: someone was letting themselves in our home when we weren’t there or it was paranormal. No one likes the thought of having a stranger in their home so I changed the locks and the alarm codes, but it kept happening.

“I like to think I’m a tidy person. Everything has its place. If Melanie leaves a pair of muddy shoes on the kitchen floor they will be placed neatly together.  It’s things like this that makes it obvious that something has happened. I mean, when you come home from the shops and one shoe is in the sink and the other in the lounge, it’s pretty obvious!

“For six months the activity gradually increased. Chairs were turned over, furniture and ornaments moved, even our clothes were thrown around the house.  Sometimes we would lie in bed at night listening to the magnetic shower door opening and closing in the bathroom and the cutlery draws rattling in the kitchen.  One weird thing was that we constantly woke up at 3.33am. Sometimes I woke up and sometimes it was Mel, but the clock always said 3.33am.  Even if I reset the clock it would happen again the following night.  If you do an internet search on this phenomena you discover some quite alarming theories!

Casper, Get Thee Gone From The End Of My Bed!

“One night I was awoken by Mel calling my name. But when I looked at her she wasn’t looking at me but was sitting up staring at the bottom of the bed. She kept asking what I was doing and would I come back to bed. After a couple of seconds of me watching her having a conversation with thin air I asked her what she was doing.  Her response was to scream with shock at finding me still in bed next to her.  She said that she had woken up and saw someone standing at the bottom of the bed. She just naturally assumed it was me. I do believe that she saw something that night because I was witnessing things too.  Moments later there was an almighty crash as things started to fly around the room.  That was quite a sleepless night!

“The things that we experienced and still experience at the house serve us well when we are investigating a case at someone’s home. In many cases we can relate to what they are going through and give help and advice. I think the clients feel happier that they are talking to people who have experienced paranormal activity and don’t think they are mad.

“After many months we became used to odd things happening from time to time in our home and we actually miss them when nothing happens for a long time.  We don’t feel scared or frightened living there; we are far too inquisitive about what’s happening.  Being involved in the paranormal community as we are, we know many psychic mediums. Many are or friends and visit us at our home.  All of them have told us that we have two spirits at the property. An old tramp and a young girl.  I don’t know if they are correct but, whatever it is, it’s part of the family!”

When Good Grandmas Go Bad: telling stories to your grandchildren has never been so much fun…

A GHOST OF A CHANCE – A FICTIONAL NOVEL 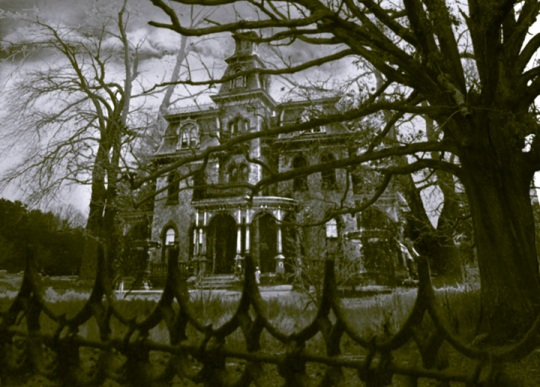 Dee Matlock is 30 years old and fresh out of  a disastrous relationship.  In her desperation to meet someone else before she turns “thirty, single and crazy” she decides to join a dysfunctional paranormal group based at an old manor house.

Between the the founder of the group, the suave and sexy Aaron Myers, and The Manor’s owner, arrogant heiress, Amelia Haughton-Rose, who enjoys nothing more than trying to make Dee feel as insignificant as possible, Dee soon finds she has more on her plate than she can handle.  But just when Dee thinks things couldn’t possibly get more complicated, she soon finds herself embroiled in the dark and murderous history of The Manor…

SAMPLE CHAPTER: A Ghost Of A Chance – Sample Chapter

To place an order email: weirdworld@hotmail.co.uk