I’ve been to a fair few theatre productions in my time, some of which were cruelly enforced viewings as part of my Theatre Studies course at college (to this day, the only thing I remember about Anton Chekhov’s The Seagull is the reinflated road kill they dragged out on stage halfway through that was meant to represent the assassinated sea bird).

Theatres are, by their very nature, hugely atmospheric places.  For many a season actors have gone through every emotion known to man on their stages so it is hardly surprising that so many theatres have reports of Thespians and Luvvies who refuse to bow out at the final curtain.

In 1880, the Lyceum Theatre, Wellington Street, WC2, caused a stir when, just before a performance was about to begin, a husband and wife happened to glance over the balcony before they took their seats.  They were horrified to see a severed head staring back at them from the lap of one of the ladies below.  They were about to investigate further when they were forced to take their seats again.  I don’t know about you, but it would have taken more than the dimming of the lights to stop me investigating a severed head in someone’s lap.  They peered over the railings only to find the lady below had covered her lap with a shawl.  After the performance, the couple tried to follow the mysterious woman but they lost her in the crowds outside the theatre.   Sometime later, the husband visited a house in Yorkshire and, while he was there, happened to notice a familiar face staring down at him from one of the paintings on the wall.  It was the very same face he had seen glaring up at him from the woman’s lap in the Lyceum Theatre.  The husband was informed that the painting was of a distant relative who had once owned the land the Lyceum stands on but he had been executed for treason.  The  man had been beheaded.  (source: Haunted London by Richard Jones).

My trustworthy correspondent from Putney, Penny Hopwood, sent me the following experience:

“I once worked in Duke Street, St. James’s, in an office building which had once housed The St. James’s Theatre (built in 1835) and sported a beautiful Louis IV interior.  Anyway, one morning, I encountered a cleaning lady who ran screaming out of the ground floor loo.  According to her, she had been mopping the floor and, as she did so, glanced into the mirror.  Standing there staring back at her was a stunningly beautiful lady dressed in a blue crinoline gown.  Shortly afterwards, I mentioned this to somebody in the building only to be told that it was impossible to find permanent cleaning staff for the very reason that the lady in question appeared with great regularity.  It turns out that an 18th century actress had thrown herself from the top balcony of the theatre onto the spot where that bathroom now stood.” 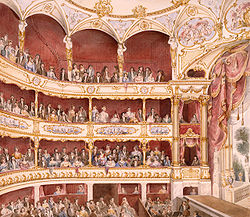 Illustration of the interior of St James’s Theatre by John Gregory Crace.

If you are interested in experiencing a haunted theatre for yourself, please contact Kieron and Mel Savill of Paranormal Knights for an experience you won’t forget.  Paranormal Knights have exclusive access to the Empire Theatre, Southend On Sea, on 19th and 20th February 2010.  Don’t miss out.