Are You Just A Figment Of My Imagination?

I met up with some friends the other weekend and, while we were sitting there chatting over a nice cup of tea, the subject turned to ghosts (of course).  My friends used to run paranormal events at a location that will remain nameless.  They told me that, some time ago, they had decided to run a small experiment to see how much influence the power of suggestion had over people when it came to ghost hunting and all things spooky.  They invented a story about a spook called ‘Bob’, I think we shall call him, and mentioned in passing to various people that ‘Bob’ haunted a certain area of the venue.   For the record, there is no history for a ghost called Bob whatsoever, it was an experiment to see if ‘mediums’ and punters would start picking up on the suggestion of the imaginary ghost.  Well, it appears that visitors and, embarrassingly enough for any true psychics out there,  mediums did indeed start to pick up on ‘Bob the ghost’, which goes to show that people are, sadly, easily led and are eager to believe whatever they are told.  I understand that ‘Bob’ became quite a celebrity rather quickly.  It has been some time since my friends ran their tours at this property but apparently ‘Bob’ is still a hot favourite for visitors and mediums alike.

Here’s One I Made Earlier…

This incident reminds me of a similar experiment where a ‘ghost’ called Philip was created by a group of Canadian parapsychologists.  They made up a‘history’ for Philip and made such a good job of it that the ghost of Philip actually started to show signs of manifesting, such as moving tables across the room, sometimes without anyone from the group actually touching the table.  Further details can be found by clicking the link below: 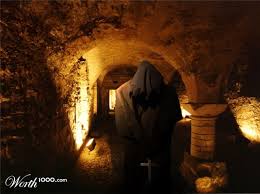 Monks – They Were Scary Enough To Start With!

I have heard further stories of people who have created a ‘tulpas’ – a fictional character that is believed in so strongly that it takes on a physical form.  I have yet to try this but I’m considering creating a  Chippendale tulpas …

Here is a link on the ‘tulpas’ theory which makes for interesting reading – the Creating Philip story is also featured on this website.  I particularly liked this article and it’s well worth reading right the way through – perhaps what we see in day to day life is indeed not what we think – click on the link below:

CREATE YOUR OWN SCARY MONK

So just how many hauntings are ‘real’?  Are some ghosts merely the products of powerful imaginations conjuring a different reality (got a bit ‘woo woo’ there, sorry)?  Perhaps stories that started out as just an exciting tale to scare people actually have taken on lives of their own because people now believe so strongly, as seen in the story of ‘Creating Philip’ and ‘Create your own scary monk’.   If so, perhaps ‘Bob’ and I need to have a little chat.