Ain’t Nothing Gonna Resurrect That… 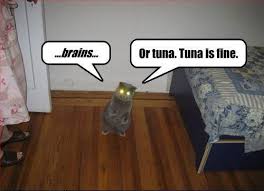 When Your Nine Lives Is Up But You Refuse To Peg It.

The other day, my elderly neighbour, Mrs R., came to see me asking if I could help take her cat to the vet.  She didn’t look at all happy but the cat looked infinitely worse.

“He was fine up until it rained yesterday,” she told me sadly as we stood over the cat who was busy languishing on her living room carpet.  I eyed the cat and quickly concluded that the poor thing should have been put out of its misery a fortnight ago.  Our other neighbour, Mr B., had come over to see if he could help but, alas, it was clear that there was nothing more he could do other than dig another hole in Mrs R.’s garden.  (Whoever lives in Mrs R.’s house next is going to get one hell of a shock if they landscape that back garden: “Doris!  Doris, you’ve read Pet Sematary – what was the outcome and should we consider moving?!”).

“You know, I’m not sure that cat’s going to make it to the vet,” Mr B. muttered to me as Mrs R. scooped the stricken creature up and laid it in the cat carrier.  I peeked at the cat through the bars of its box.  Glassy eyed, mouth open, tongue trying to escape its head… it looked like it was somewhat… dead.

I kid you not, that cat was having a game with me as we loaded the carry box into my car and trundled off to the vet.  It waited until we parked up, walked in and sat down before it finally decided it would be better off vacating.  However, we stayed until the vet had a look at the now rapidly stiffening cat, pronounced him DOA (and probably dead quite some time before arrival too… days… perhaps weeks… it certainly smelt that way…) and gave poor Mrs R. a sympathetic smile.  I’m sure it was on Mrs R.’s lips to ask the vet to give the cat a shot with a defibrillator to see if that would do anything but I quicky ushered her back out through the door and into the waiting room again, her ex-cat firmly wedged back into its travel box ready for future planting in the back garden.

While I was sitting in the vet’s waiting room with zombie cat quietly trying out his latest rigor mortis poses at my feet, I thought about experiments that have been carried out in the past to try to resurrect animals.  Because in the 1940s, the Russians decided this was a good road to go down.  And us humans just can’t leave anything alone, can we?  Dead or otherwise, we just have to tinker.  Well, let’s face it, this kind of experiment is never going to be pretty, so people with a weak disposition probably shouldn’t proceed beyond this point (who am I kidding, we all know  you’re going to go ahead and watch it anyway):

And when you consider how we have progressed from that to this:

My, we have come a long way!  Hopefully Mrs R.’s cat will remain at peace in the back garden though because I’d hate to have to go after it with a shovel.  Hey, I’ve read Pet Semetery, too.

But for those of you who are now thoroughly traumatised, here, this should sort you out:

I Sell The Dead

The Horror Of Mannequins